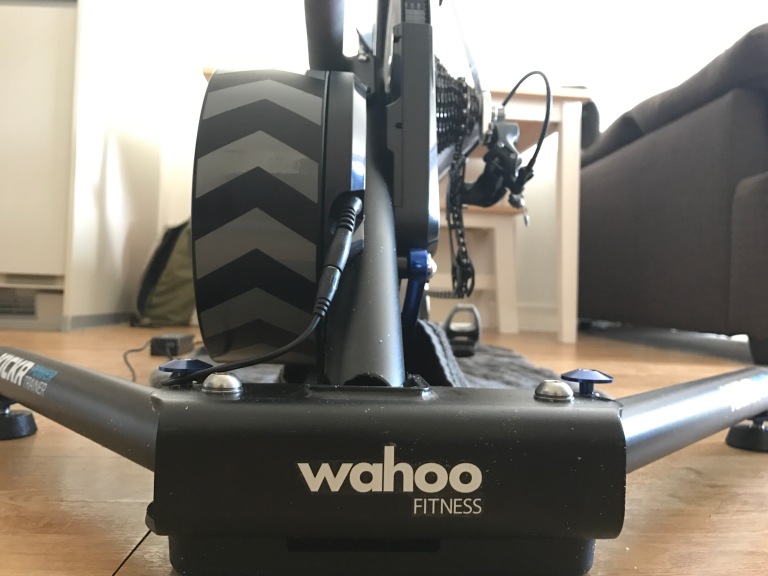 What’s the point? Surely cycling is all about the great outdoors, getting out there with other riders, giving them a wave as you go by, grabbing a cheeky toe every now and again all the wind rushing through your hair?

Well, I have to say, I am a bit of an indoor cyclist. I do my fair bit of spinning, my local is at Cyclebeat. They’re based in Monument/Bank and I’ve been a member for almost two years now. I find spinning a great way of maintaining a base level of fitness and helping you build technique as well as a higher average watt pushing power, which is what we’re all after right?

The reason I mention Cyclebeat is because they’re great – their instructors are great and what they do is unlike any spin class I’ve been to. They have a Beat Bored in front of the 50 bikes in the class (Basically two big TV screens), which shows your bike number, cadence, power output and converts that in to a total number, which builds throughout the class. You’re then ranked against your other indoor cycling buddies, “It’s not a competition.” the instructors always say at the start. It is. It always is. If bike number 17 is two points ahead, I’m chasing him down. If bike number 23 is coming up after me, I’m going to turn myself inside and out to keep them at arms length and try and break them before I do.

So I completely get the point of indoor cycling. What I like about going to spin is that I have to go there, I have to get on the spin bike and after the class I can then leave. So why do I need an indoor bike trainer coupled with what is basically a game? This is the question I asked myself. Now I’m not comparing the two because that would be worlds apart, however, could I replace spin with a Wahoo KICK + a ZWIFT account… hmm… That got my head itchy.

The guys at Wahoo were ever so gracious in sending me over a KICKR to try out, a bit of background on the KICKR, you’ve probably seen Chris Froome and his mates warming up and down on the turbo before they go out and kill it in a time trial? Well Team Sky are all riding on the Wahoo KICKR, the most advance turbo trainer in the Wahoo fleet. Basically with a fly wheel, electromagnets and some wizardry, it controls the resistance you feel and it’s your job to work against that.

I must state now, I only tested the KICKR with ZWIFT – I did not test it with the Wahoo app. So that was a ZWIFT test only.

Pretty easy actually, I pulled the full 28kg’s of turbo trainer out of its box and placed it on the floor, luckily enough the KICKR comes with a handle on it which makes it slightly easier to put it where you want. Unfolding the legs was simple enough and there’s even some adjustable feet on the bottom of the KICKR to make sure it’s as level as possible.

When it’s in position the KICKR puts it weight to good use and hunkers down so that it’s not wobbling all over the place as you ride.

Attaching your bike is as simple as replacing your rear wheel, which you’ll have to remove before you latch on to the KICKR, fret not, it’s 11 speed gear hub is very good and you’ll thank it for 11 gears when you’re pushing up a climb! Without teaching you to suck eggs, before you take your own wheel off it’ll be easiest if your chain is sat on the smallest cog so it just slots back on the smallest cog on the KICKR. The quick release skewer which comes with the KICKR fastens tight and secures the bike firmly in place.

As a side note, I have to admit I felt a bit nervous getting on first time as I wasn’t sure whether the bike would be nice and stable as I got on. In fact, as soon as I was on I was able to take my hands off the bars and felt instantly at ease.

Well, I have to admit, I was left scratching my head a little bit. I started by downloading the Wahoo Apps and fiddling about with that. I had to do a run down for the KICKR to make sure it was fully calibrated – sprinting up to 33kph and then letting the flywheel run down. Once that was done, I was clocking about on my laptop for ages wondering why, oh why, I couldn’t pair the ‘effing thing to my laptop. After about ten minutes the penny dropped. There’s a little cog in the top right corner of the ZWIFT screen, I had to click on that and choose my laptops internal Bluetooth. Once that was selected the KICKR paired instantly.

So yes, it’s very easy to pair with ZWIFT if you’re not an idiot like me.

OK I get it, you’re riding you bike indoors, what’s the point? Plus you’re looking at a screen, who is that avatar there? It’s not realistic. The thing is, the ZWIFT avatars never claim to be realistic, they know you know you’re looking at a screen. Even the ‘gameplay’ reflects this, on the loop which I did I took a right turn ended up going down a tube station and cycling along the London Underground and ending up popping out near Box Hill… Now I need to try and figure out which those stations are in real life as I got to Box Hill in minutes!

Look – as long as you get that you’re effectively playing a game to test your fitness, you’ll love it. I did, I thought it was great, genuinely great. I couldn’t wait for my next ride. I didn’t want my ride to end but after eight weeks of being off the bike and no training (I have recently become a father and it becomes really quite tough to keep the training and riding up) I was in a pretty bad way, embarrassingly! I don’t know how Chris Froome manages it…

If you’ve not got the hours to ride your bike, ZWIFT it, you just have to. 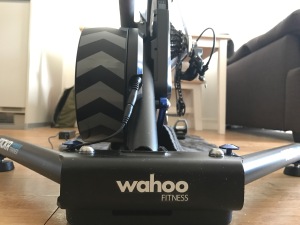 It’s amazing, when you hit a hill, you feel it just as you would in real life, the gradient builds on your gear, you feel the resistance in your legs, pulling for a lower gear. Tapping out a tempo. Brilliant.

Wahoo claim in their PR mumbo jumbo that at 61db it’s their quietest KICKR and that all you’ll hear is the pounding of your heart and breathing not the fly wheel… Erm, well… If your heart sounds like a World War II all clear air raid siren then I guess that’s true. The fly wheel does make a noise, a noticeable whirr as it goes around. However, when you’re in the pain locker you’re not hearing it, you’re focusing on your effort.

The only draw, is the noise. If your child is sleeping next door, like mine, I was constantly worried that a big effort would wake him up.

I absolutely loved riding the KICKR, it felt so realistic. It did make me think, I could cancel my spin membership and just buy a KICKR. Get my money back in the long run… However, I did find the idea of training in my living room a little bit uncomfortable, I kept glancing at the sofa thinking, I could just be on that. I lacked that extra little bit of motivation which you get from getting up and going to the gym.

As a fitness tool, I don’t think you could as for much better. The good news? There’s a cheaper option! Only £499 for the Wahoo SNAP. Bargain. Good job they do free shipping if you spend over £55!

You can buy a KICKR from the Wahoo website here

You can view the Wahoo Turbo Trainer range here

You can see about Cyclebeat here

You can read my other blog posts here